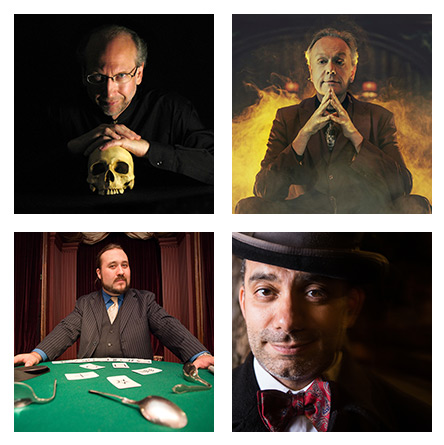 Christian Cagigal will explore his approach to creating theatrical, narrative driven, and spooky magic, with an emphasis oh how the performer’s physical and emotional choices can turn a card force into a miracle. His eerie “Sortilegios” on Zoomcan be booked for October shows now) and in real life when, in non-pandemic times Christian takes people an in-person Ghost Hunt on his Virtual Ghost Hunt Fireside Stories plus Magic. He scares up fresh news on Facebook.

Paul Draper is a magician and mentalist who will talk about how he creates and manages a huge haunted attraction each year in Salt Lake and what that entails. Obviously that’s canceled this year but he keeps busy with reports on Facebook.

David Parr annually performs a magic show that moves from room to room in an old haunted historic mansion. He’ll discuss the creation and approach to that and how he taps into the spooky realm on Zoom. Current manifestations appear onFacebook.

Todd Robbins will talk about the hugely successful production of Play Dead in New York that he created with Teller. Todd also hosts “True Nigthtmares” on ID and produced “Speakeasy Magick” at the McKittrick Hotel (of Sleep No Morefame). Visit his Facebook page for current happenings, dead and alive.